You Had Me At Pony!

The origins of the Farrier Collection are a story of strength, recovery, and equestrian inspiration.
By Debby Buck DeJonge 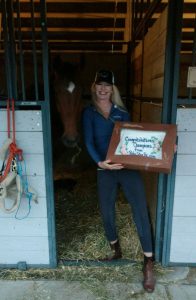 My love for ponies remains even though I grew into horses and stayed through every available 4-H year earning me the ten year 4-H pin. Fair week is still among my favourite memories spent solo with my Mother who also mothered anyone in need. Her inner beauty was equalled by her exterior as was taken note by a fashion house in NYC where she made her career for several years as a model. Her sense of style and fashion directly resonated with my brother, Brian, who was an iconic fashion designer for such Rock Bands as Kiss, ACDC, Ted Nugent, to name a few. Later I learned that I was in good company after a hat-trick of horrors befell me.

The crash of 08 hit hard and with a punch that still keeps a constant crease in my stomach. My husband and partner died with no notice that October right after the Championships in Ohio. The shock and the loss are still there like a slice of swiss cheese which really shouldn’t be harnessed with holes. While I was turn styling a kaleidoscope of business issues, my horse Paxem was hit with his own personal storm as he was diagnosed with Potomac fever. Thankfully he was under the watchful eye of an excellent horsewoman, Kat Heys. She saw something and said something. The Vet suggested an item about which I was unaware called “cold boots.” Donning my Concierge hat, I went full throttle into rescue mode by refashioning my husband’s wetsuit into said boots. Three days and nights over the Fourth of July weekend the boots were attended to with a dock box of ice. Pax pulled through and I keep an extra wetsuit at the ready to this day.

The “sport of Kings,” no longer fit my new life as an added pang of angst that I wore like a vest. The family attorney suggested I let my house go to Fannie Mae and “just go brush horses.”

In reflection, I wonder how much that advice cost?
Actually, it may have been just what the doctor ordered. I definitely did not feel comfortable in the lane of losing. I summoned a personal trainer, or two, and fought through the pain, both physical and emotional. I was peeking out of the hole when I suffered career-ending injuries, launching me into a Brain clinic in NYC and forstalling my lifelong plans to play with “ponies.”

The logical thing to do was to part with my favourite dance partner. Logic doesn’t resonate with the Granddaughter of a Danish Calvery Man. Let alone, the daughter of a Marine who was the first wave ashore Iwo Jima. Damn the Torpedoes!!! It was as if my Mother was heaven sent through her best friend, Jean, ( a lovely lady approaching the age to qualify for a visit with Willard Scott who does daily Tai Chi and Manhattan!

Jean asked her son to “keep Debby’s horse until she can get back on her feet.” The thought occurred, if she thinks I can then maybe I should think so, too!

Pax was moved out to an 80-acre slice of heaven on a hay field, dotted with apple trees, honey bees and the nicest folks I’ve ever had the chance to call friends. He became fast pals with their Paint horse who was in need of a “partner in crime.” Being around the horses was healing in and of itself. I would sometimes stay in the next barn apartment and appreciate all the sights and sounds they offered. 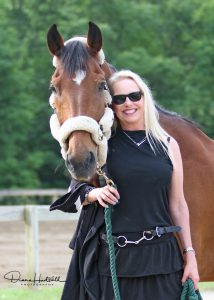 The horse bug had firmly reinfiltrated me so I also reinvigorated my volunteering once again at The Cheff Center Therapeutic Riding. Ride . . .Recover is their motto. We fit like a glove! This parlayed into my dabbling in some work at the various venues as well. A few years later I was afforded a few rides by big overstuffed sweet and sane ponies. I asked the dog, who said I lived through it, so next, I made a deal with Pax. You get extra treats if you try to keep me from falling off. A Blood Bay fur covered Saint carried me and tried to guess which way I was going and would have fallen and beat me to the floor to save me. Tit for tat, he figured, I guess. It was definitely feeling like I had a firm foothold back in the saddle.

Working at the Finals at The Kentucky Horse Park took my attention and breath away when they cranked the music up and the Freestyles hit the floor. I tap toed all the way back to Michigan secretly planning my own comeback freestyles. And, sure enough, from pasture to centerline, we danced to our own music in front of Lilo Fore’. It was our first opportunity to ride in an arena in eight years. We hit every mark. I could palpate every footfall as if each step were a gift from God. Apparently, I held it together until the final salute where I was overcome with tears of joy during the halt which looked more like a seizure in the saddle. A few dances later we were invited to compete at the Championships. What a thrill! For starters, this called for a celebratory cake which I brought to the show then, and the two Championships I was treated to since. It’s a thing. Here comes Debby with her Big cake! The afterglow can only last so long. I was craving a piece of wearable hardware to accompany my 4-H pin and went on the hunt to find said treasure, to no avail. Feeling crestfallen that I had done the impossible, and that Pax had allowed me to pull him out of a pasture after years of recess, gave rise to a badge of some sort of honor. For we had “nailed it,” and that’s when it hit me. Out came the colored pencils and crayons and the Farrier Collection was born. Gold and diamonds in the shape of a farrier nail. Every color, every length, every ride. The perfect symbol for those who are equestrian enthusiasts or, like Elaine, the character from Seinfeld put it best in an episode about Europe, “who leaves a country packed with ponies?” Not, this girl. Not now, not then, not ever. You had me at pony!